10 May 2012: Application for Review and Declaratory Order: 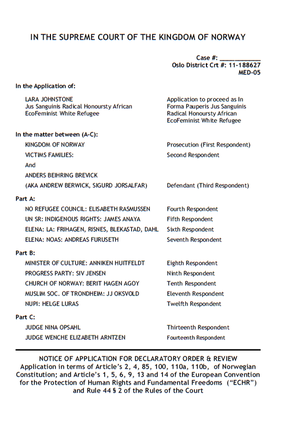 Notice of Application for Review and Declaratory Order (PDF) submitted to Supreme Court Registrar and Chief Justice Tore Schei , including request for issuance of a Case Number.

Application requests the Supreme Court to provide the following orders:

[A] Applicant to be admitted as a Jus Sanguinis Radical Honoursty African EcoFeminist White Refugee Applicant in this matter, and granted Assistance of Council/Support in this matter from the Norwegian Refugee Council and/or ELENA.

[B] An Order demanding the Norwegian Ministry of Culture to act in accordance to European Court of Human Rights ruling in Lithgow & others v. United Kingdom, and clarify in adequately accessible and sufficiently precise statement; whether Norway is (A) a ‘Children of the Rainbow’ State legally committed to Multiculturalism, providing all cultures their right to invoke cultural law and hence granting the Applicant her rights to invoke Radical Honoursty cultural law; or (B) a Monocultural Indigenous European Supremacy Legal Hegemonic State, and that the Labour Party Immigration policy is a tactic to maintain their grip on power, by importing Non-Western immigrants as Labour Party vote-fodder.

[C] To Review the Oslo District Court failure to act in accordance of due process to a Jus Sanguinis Radical Honoursty African EcoFeminist White Refugee Applicant member of the Radical Honesty culture, in the following applications: [A] The Applicants 30 November 2011 Application for a Writ of [I] Habeus Mentem on behalf of Anders Breivik psycho-cultural integrity right to a free and fair trial; and [II] writ of Certiorari/Review of the Psychiatric Evaluation Report of Psychiatrists: Synne Serheim and Torgeir Husby as to the Mens Rea political necessity criminal liability of Anders Breivik terrorist acts, on 22 July 2011. (Annex A) and [B] The Applicants 15 April 2012 Application to proceed as In Forma Pauperis Jus Sanguinis Norwegian African White Refugee Amicus Curiae for an Order (1) to approve the Applicant as an In Forma Pauperis Jus Sanguinis Norwegian African White Refugee Amici Curiae, and (2) Amending the Charges Against the Defendant [Breivik] and Applicant [Johnstone] to include Treason in terms of Article 85 of Norwegian Constitution, and if found guilty, in a free and fair trial; to be executed by firing squad. (Annex B)

Response from from Court Administration: Deputy Secretary General: Kjersti Buun Nygaard refusing to provide me with a Supreme Court Case number for my application for Review and a Declaratory Order.

16 May 2012: Environmental Crimes Complaint to Interpol

“The economic and political problems with which we concern ourselves are merely manifestations of our ecological predicament -- they are symptoms, not the disease.” – Chris Clugston: Scarcity: Humanity's Last Chapter: A Comprehensive Analysis of Non-Renewable Natural Resources and its implications and consequences for humanity

Appeal to Supervisory Committee for Judges:

Norway Courts for Masonic War is Peace cultures only?