Appeal to Secretary General for Access to Information; in terms of (i) Statutes of the Press Complaints Commission, Section 4; (ii) Public Administration Act (PAA), section 23, 24, 25, and (iii) Freedom of Information Act: Section 2.

Relief Requested: Order the: (A) Secretariat of the Norwegian Press Association to provide complainant with their Written Reasons for their 28 August 2012 decision to refuse my representation that special circumstances of journalistic/editorial ethics warrant that my complaint (Case 239/12 - Lara Johnstone vs. Views and News from Norway) be processed in the absence of Mr. Breivik’s consent. 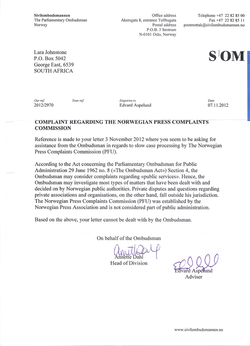 Reference is made to your letter 3 November 2012 where you seem to be asking for assistance from the Ombudsman in regards to slow case processing by The Norwegian Press Complaints Commission (PFU).

According to the Act concerning the Parliamentary Ombudsman for Public Administration 29 June 1962 No. 8 ("The Ombudsman Act") Section 4, the Ombudsman may consider complaints regarding "public services". Hence, the Ombudsman may investigate most types of matters that have been dealt with and decided on by Norwegian public authorities. Private disputes and questions regarding private associations and organisations, on the other hand, fall outside his jurisdiction. The Norwegian Press Complaints Commission (PFU) was established by the Norwegian Press Association and is not consider part of public administration.

Based on the above, your letter cannot be dealt with by the Ombudsman.

Parliamentary Ombudsman for Masonic War is Peace cultures only?