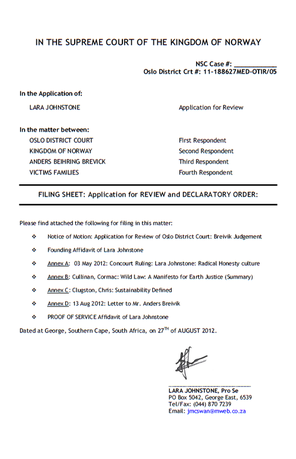 Excerpts from Notice of Motion.

[A.2] Set Aside Defendant’s Conviction (Finding of Guilt) and Remit to Oslo District Court for hearing of Further Evidence to conclude Objective and Subjective Necessity Test Evidentiary Enquiry.

[A.3] If Defendant refuses to cooperate with Further Evidence proceedings; an order to change his plea to ‘guilty’; and/or ‘Non-Precedent’ Setting Declaratory Order

[A.4] If Failure of Justice Irregularity Does not Influence Conviction and/or Sentence Verdict; a ‘Non-Precedent Setting’ Declaratory Order

[B] Set Aside the Judgements Failure to disclose the pending Judicial Ethics violation complaint against Rettens Leder: Wenche Elizabeth Arntzen, filed on 06 June 2012 to the Secretariat for the Supervisory Committee for Judges, as a violation of Aarhus Convention Article 3.(3)(4)(5) principles, and general ECHR public accountability Transparency (Lithgow & others v United Kingdom) principles.

The application for review is based on the grounds of (A) Irregularities & Illegalities in the Proceedings before the Oslo District Court: in terms of (1) A Failure of Justice and Failure of a True and Correct Interpretation of the Facts; (2) Judicially Un-Investigated Facts; (3) Failure of Application of Mind and (4) Rejection of Admissible or Competent Evidence: (i) Prosecutor & Judges failure to examine objective and subjective necessity test; and (ii) Courts denial of due process to applicants Habeus Mentem and Amicus Curiae applications.

[A.1.a] Necessity Judgement fails to provide any necessity criminal provisions that prohibit killing of Government Officials in case of Necessity.

[A.1.b] Necessity Judgement Ignores that Criminal Necessity provisions do not prohibit the killing of Government Officials in case of objective and subjective Necessity.

[A.1.f] Necessity and Guilt Judgement’s Absence of Clarification Upon which party the Onus of Proof lies in a Case of Necessity; and how or why their evidence was insufficient renders the Judgements Conclusions inadequate.

[A.1.i] Necessity Judgements ‘Extreme Political Objectives’ conclusion is unsupported in the Absence of Objective and Subjective Necessity Test; and is a Patriarchal Left vs. Right Wing Blame Game Parasite Leeching Polarization – not a Matriarchal Ecological and Psychological Integrity Root Cause Problem Solving – conclusion.

Table of Contents of Founding Affidavit:

28 Aug: Request to Registrar: Request for a Case Number:


"Could you please provide me with a case number for my application for review; or inform me by when you will issue a case number?"

31 Aug: Request to Registrar: Request for Case Number or Reasons for Refusal:

Norway Supreme Court Registrar: I am still waiting for a case number for my application for review. Could you kindly provide such case number or clarify reasons for your failure to do so. 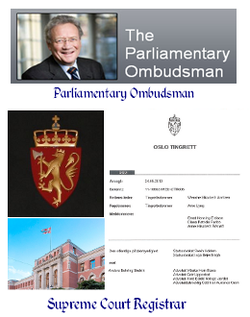 Slow Case Processing: Application for Review of ‘Breivik Judgement’filed with Supreme Court Registrar on 27  August 2012 to Set Aside the Judgements (1) ‘Necessity (Nodrett) Ruling’ and (2) Defendant’s Conviction (Finding of Guilt) and Remit to Oslo District Court for hearing of Further Evidence to conclude Objective and Subjective Necessity Test Evidentiary Enquiry. Subsequent follow up requests made on 28 August and 31st August requesting Registrar to provide a case number, or clarify their reasons for failure to provide a case number. 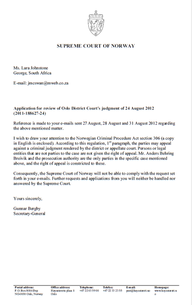 Reference is made to your e-mails sent 27 August, 28 August and 31 August 2012 regarding the above mentioned matter.

I wish to draw your attention to the Norwegian Criminal Procedure Act section 306 (a copy in English is enclosed). According to this regulation, 1st paragraph, the parties may appeal against a criminal judgment rendered by the district or appellate court. Persons or legal entities that are not parties to the case are not given the right of appeal. Mr. Anders Behring Breivik and the prosecution authority are the only parties in the specific case mentioned above, and the right of appeal is constricted to these.

Consequently, the Supreme Court of Norway will not be able to comply with the request set forth in your e-mails. Further requests and applications from you will neither be handled nor answered by the Supreme Court.

11 Sept: Response to Sec. Gen. G. Bergby: RE: Legal Standing is for a Court, not Registrar to decide:

* Request Norwegian Court Officials Provide Consideration to my Review Application, equivalent to the Consideration Given by Military Judge Lind in the Bradley Manning Courtmartial to Letters from Center for Constitutional Rights.

* Judicial Review vs. Appeal Options: Norwegian Justices Confirm Availability of Judicial Review in Norwegian Courts:
1. Former President of Norwegian Supreme Court Justice Carsten Smith, in "Judicial Review of Parliamentary Legislation: Norway as a European pioneer" (Amicus Curiae, Issue 32, November 2000)
2. Chief Justice of the Norway Supreme Court: Tore Schei's, 4 October 2007 letter to President of the Constitutional Court of the Republic of Lithuania, Justice Schei discusses how “... we will give a brief overview of the system of judicial review in Norway.."
3. Supreme Court Justice: Karen Bruzelius's letter to the Council of Europe, Venice Commission, where she elucidates on "Judicial Review within a Unified Court System".

The Review application can be processed in accordance with any, or a combination of the aforementioned statutory guidelines, referring me either to the Interlocutory Court in terms of Sections 381 to 388, the Criminal Cases Review Commission (Section 389), a relevant Appeals Court.

In the absence of a response by 10 October 2012, I shall conclude you have no intention of responding, and refer the matter to the Parliamentary Ombudsman.

Could you kindly provide me with the relevant statute in Norway that provides the Secretary General the authority to refuse to process a case, citing lack of locus standi/legal standing; thereby denying such applicant due process access to be heard by an impartial court?

It is my understanding – perhaps incorrect - that it is not a matter for the Secretary General to make a final ruling on the relevant locus standi / legal interest of any party in any dispute, but for the court, if any party raises the matter as a matter of dispute. 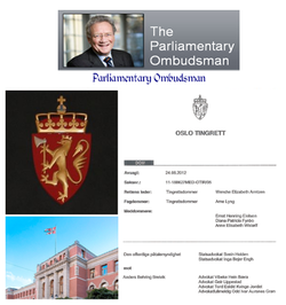 On 27 September Petitioner filed an Application for Review of ‘Breivik Judgement’ filed with Supreme Court Registrar on 27  August 2012 to Set Aside the Judgements (1) ‘Necessity (Nodrett) Ruling’ and (2) Defendant’s Conviction (Finding of Guilt) and Remit to Oslo District Court for hearing of Further Evidence to conclude Objective and Subjective Necessity Test Evidentiary Enquiry. A complaint of slow case processing was filed with the Ombudsman on 02 September 2012.

On 11 September, Petitioner filed a request for clarification of the ruling, requesting among others the specific statute that grants a Sec. Gen. the authority to make a ruling on legal standing, when, this is generally a matter that is decided upon by a court, if the respondent party raises it as a matter of dispute.

No response has been received to petitioner’s 08 October reminder letter. 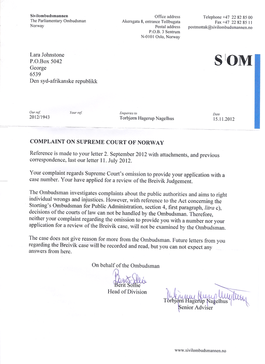 Reference is made to your letter 2. September 2012 with attachments, and previous correspondence, last our letter 11. July 2012.

Your complaint regards Supreme Court's omission to provide your application with a case number. You have applied for a review of the Breivik Judgement.

The Ombudsman investigates complaints about the public authorities and aims to right individual wrongs and injustices. However, with reference to the Act concerning the Storting's Ombudsman for Public Administration, section 4, first paragraph, litra c), decisions of the courts of law can not be handled by the Ombudsman. Therefore, neither your complaint regarding the omission to provide you with a number nor your application for a review of the Breivik case, will not be examined by the Ombudsman.

The case does not give reason for more from the Ombudsman. Future letters from you regarding the Breivik case will be recorded and read, but you can not expect any answers from here.
Continued at:

Norway Courts for Masonic War is Peace cultures only?