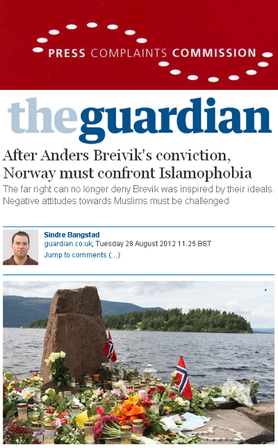 This complaint refers to a violation of Editors Code. 1. Accuracy, and relates to the following statements made by Mr. Bangstad in his article: After Anders Breivik's conviction, Norway must confront Islamophobia[1]:

The far right can no longer deny Brevik was inspired by their ideals. Negative attitudes towards Muslims must be challenged.

After a national trauma, the verdict presents us with the opportunity to finally face and confront the hatred in our midst with the honesty, seriousness and commitment it requires of us all.


[1] Inacuraccy of Mr. Breivik’s ‘conviction’: Conviction has been appealed by means of review.

On 27 August 2012 an application was filed with the Norwegian Supreme Court for Review of the Oslo District Court: Breivik Judgement, to set aside (A) the Necessity ruling, and (B) the conviction; to conclude Objective and Subjective Necessity Test Evidentiary Enquiry. The finding of guilt, in the absence of full Objective and Subjective Necessity Test Conclusions renders the Guilt Finding Inadequate.

[A.1] Set Aside the Judgements ‘Necessity (Nødrett) Ruling’

[A.2] Set Aside Defendant’s Conviction (Finding of Guilt) and Remit to Oslo District Court for hearing of Further Evidence to conclude Objective and Subjective Necessity Test Evidentiary Enquiry.

[A.3] If Defendant refuses to cooperate with Further Evidence proceedings; an order to change his plea to ‘guilty’; and/or ‘Non-Precedent’ Setting Declaratory Order

[A.4] If Failure of Justice Irregularity Does not Influence Conviction and/or Sentence Verdict; a ‘Non-Precedent Setting’ Declaratory Order

[B]     Set Aside the Judgements Failure to disclose the pending Judicial Ethics violation complaint against Rettens Leder: Wenche Elizabeth Arntzen, filed on 06 June 2012 to the Secretariat for the Supervisory Committee for Judges[2], as a violation of Aarhus Convention Article 3.(3)(4)(5)[5] principles, and general ECHR public accountability Transparency (Lithgow & others v United Kingdom)[6] principles

[B] Possible Inacuraccy of Mr. Breivik’s inspiration being the ‘far right’

Mr. Breivik’s decision to refuse to appeal his conviction, particularly in light of the gross irregularities that occurred during his trial, by the Prosecution avoiding an enquiry of his evidence by means of the required objective and subjective test that is required in cases of an accused pleading to necessity; indicate a possibility that the obvious motivation may not be his true motivation.

Mr. Breivik appears to be the only political activist in the history of civil disobedience activism who has plead to necessity, who appears to have no interest in demanding that his evidence be examined in accordance to the required objective and subjective tests; and who refuses to appeal the denial of the prosecution to conduct these tests.

If Mr. Breivik sincerely believed that his 22 July terrorism actions were motivated by necessity, then such sincerity would wish to have his evidence examined in accordance to the rules of evidence, to determine the quality and quantity of its authenticity or lack thereof.

In the absence of a fully impartial investigation by conducting an objective and subjective test of Breivik’s evidence, it is not possible to determine whether his evidence is founded on inaccurate bullshit, or accurate experiences.

Nobody – least of all Muslims - benefit from being bullshitted that they do not need to improve some of their behaviours, if or when such anti-social behaviour is proven by accurate facts. Only white guilt liberals, who think that Muslims or Africans are some inferior retarded species, that need to be denied the opportunity to better themselves by means of constructive criticism feedback, so that they can forever remain retarded dependents of white guilt liberals, have such self righteous bigotry towards Africans and Muslims, while projecting that bigotry on individuals who do think that Muslims or Africans are quite capable of hearing honest criticism and share such criticism as a concerned individual, with the best of intentions for helping another person learn and grow. 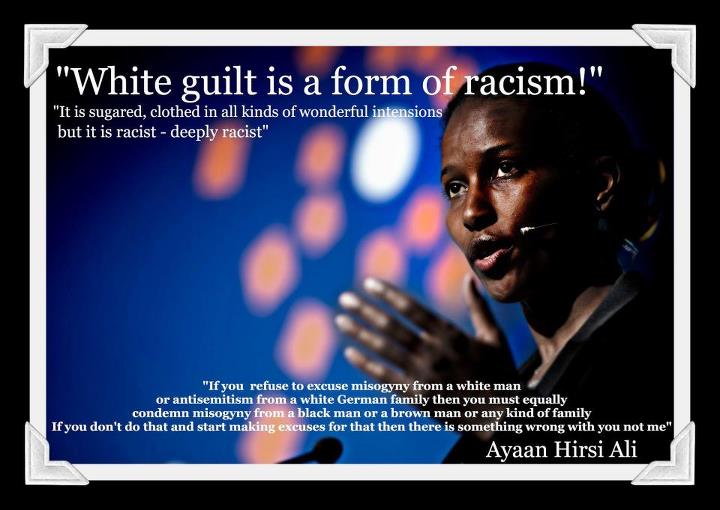 A copy of the application is attached.

I accordingly request the Guardian to be ordered to:

(A)    Correct the error implying that Mr. Breivik’s conviction has not been contested.

(B)    Clarify the Guardian, or Mr. Bangstad’s perspective as to whether he is stating Mr. Breivik’s ‘far right inspiration’ as a fact; or as an opinion.

The complainant considered that the publication (23/08/2012) had breached Clause 1 (Accuracy) of the Editors’ Code of Practice by saying, in relation to Mr Anders Breivik, “so, how do we handle the man who is truly guilty?” The complainant was concerned that this characterised Mr Breivik as “truly guilty” before a verdict had been passed.

Clause 1 states that “the press must take care not to publish inaccurate, misleading or distorted information”. The Commission acknowledged the complainant’s point that, at this stage, Mr Breivik was not technically guilty in the legal sense. However, the Commission considered the context in which the words had been used and noted that the article made clear that the verdict had not yet been decided: “on 24 August, the verdict against Anders Behring Breivik will be pronounced at Oslo District Court”.

Read in the context of the article, the journalist had been discussing the amount of blame that the Prime Minister and other individuals should shoulder for the events; before addressing the “man who is truly guilty”. In this way the Commission considered that the term “guilty” was being used, not in the legal sense, but synonymously with the term “responsible” or “to blame”. Given that Mr Breivik had publically admitted to the murders and bombing, the Commission did not consider this to have been inaccurate or misleading. The Commission did not establish a breach of the Code.

The Commission acknowledged the complainant’s concern about Mr Breivik’s ability to receive a fair trial, it made clear however that this issue did not fall within the Editors’ Code of Practice, and therefore it was unable to comment on this further.

The Commission turned next to the complaint regarding the article of 28 August. The complainant considered that the newspaper had breached the terms of Clause 1 (Accuracy) by referring to Mr Breivik’s “conviction” and by inferring that his inspiration was from the “far right”.  Regardless of whether or not there is a review, it remained the case that the conviction stood at the time of publication, and the newspaper was entitled to refer to it. There was no breach of Clause 1.

The Commission addressed the complainant’s concern that it was inaccurate to state that Mr Breivik got his inspiration from the far right. Clause 1 (iii) states that “the press, while free to be partisan, must distinguish clearly between comment, conjecture and fact.” The Commission considered that the article was a comment piece and the remark reflected the journalist’s opinion that Mr Breivik’s actions were based on an extreme right-wing ideology. In this regard the Commission was satisfied that readers would not have been misled and did not establish a breach of the Code.